Caution:
While transferring Pokémon from the smart device app Pokémon GO to the games Pokémon: Let’s Go, Pikachu! or Pokémon: Let’s Go, Eevee! on Nintendo Switch, if the connection is interrupted, the app may not be able to resume transfer. However, users will be able to continue to play the game once they exit the transfer screen.


What to Do:
Uninstall the Pokémon GO app from your smart device and then reinstall it.
Note: The Pokémon may become lost and cannot be recovered, as uninstalling and reinstalling the app would cause the transfer process to be stuck in limbo.


Best Practices:
While transferring Pokémon between Pokémon GO and a supported game on Nintendo Switch, avoid actions that may interrupt the connection between the two, such as:
● Pressing the HOME Button or the POWER Button on the console.
● Pausing the app, pressing the HOME button, or turning off Bluetooth settings on the smart device.
● Having too much distance between the Nintendo Switch console and the smart device. 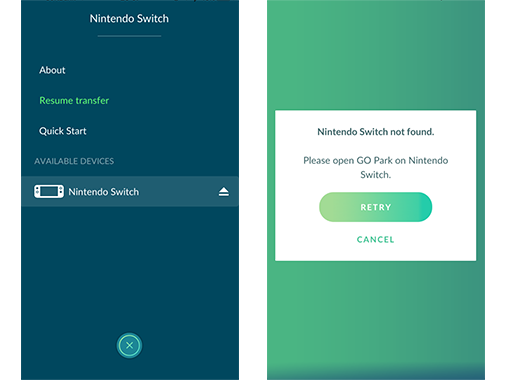